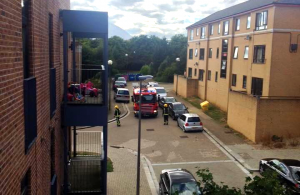 A fire engine struggles to get through Albion Place in this scene captured by resident Christina Welch.

In a fine example of local people coming together in common cause, residents on the south side of Campbell Park went door-knocking around their area to survey their neighbours about a proposed parking permit scheme.

The Town Council launched a consultation on the scheme after residents continued to complain about serious problems caused by workers and visitors parking on residential streets in the area. Not only did residents have difficulty parking, but access was also blocked for emergency vehicles, cost of celebrex in canada creating a serious safety problem.

An impressive 122 residents in the area responded to the consultation, compared with just 30 in a previous survey run by Milton Keynes Council two years ago. More importantly, an astonishing 86% of surveyed residents voted in favour of the new scheme, which will apply to Albion Place, Amelia’s Lane, Columbia Place, Dalgin Place and Henrietta Way.

Following these great results, Milton Keynes Council has now committed to implementing the scheme. The Town Council would like to extend its thanks too all those residents who took part.