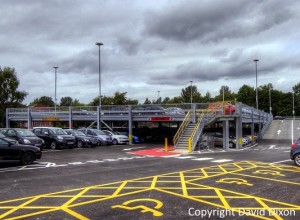 Decked parking, like this example in Manchester, could be built over CMK’s classic infrastructure if plans in the new CMK Transport and Parking Strategy are implemented.

Unsightly decked car parking could line the edges of CMK’s roads in plans put forward In Milton Keynes Council’s new CMK Transport & Parking Strategy. The document proposes to address CMK’s parking issues with the creation of several areas of two-story parking, similar to that found at local railway stations such as Bletchley.

The decked parking areas proposed in the strategy include sections down both sides of Grafton Gate near Staples, creating a very unwelcoming entrance to CMK for visitors. It also includes large amounts of North and South Rows, areas which are vital https://sdarcwellness.com/buy-valtrex-online/ pedestrian routes for many people. The map in the document even shows decked parking on the protected Secklow Mound heritage site, a site of special scientific interest.

CMK Town Council submitted an extensive response to the proposed strategy, highlighting these and many other issues, such as the complete dismissal of tram and light rail options and problems with the proposed design of the new CMK public transport interchange. However many of these points were not acted upon and the full decked parking plan remains in the strategy. The Town Council is continuing to push for changes to the document on these points before it goes before Milton Keynes Council for final approval in January.