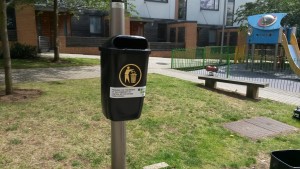 One of the new lamppost-mounted litter bins in Petersfield Green.

An area of CMK that suffers from litter problems is set to benefit from four new bins, thanks to Town Council funding. The new bins will be installed in Petersfield Green, the area of housing approaching the underpass into Oldbrook at the bottom of South Fifth Street. This area experiences problems with litter being dropped by passing pedestrians, which then gets blown around the confined space between the buildings. This instillation comes in response to the feedback from last year’s residents’ questionnaire, in which the majority of residents chose litter bins as the highest priority for small-scale projects in CMK.

A second, separate instillation will also see two new dog bins provided inside Campbell Park. While residents from across the city come to Campbell Park to walk their dogs, there is currently a lack of bins for them to use, leading to dog littering becoming an issue. With the Park being one of Milton generic celebrex reviews Keynes’ greatest assets, it was felt that it was the right place to trial the bins and assess how successful they are in dealing with the problem. 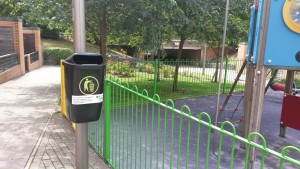 Another of the new bins near the busy Childs Way underpass.

On a related note, the CMK Warden has also lead the instillation of a number of new cigarette ‘butt bins’ around CMK, funded by Milton Keynes City Centre Management (MKCCM). These are being installed across the city to give office workers and visitors an easy way to dispose of cigarette butts, combating the problem of cigarette littering that exists in many areas of CMK. The first instillation has been provided outside the Santander offices on Midsummer Boulevard, and early indications are that they are being well used.

More information and updates about the new bins and the other work being done by the Street Warden can be found in the Warden’s reports.