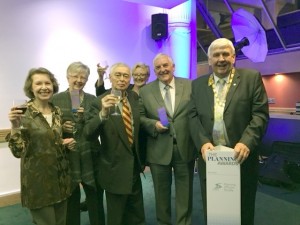 The pioneering CMK Business Neighbourhood Plan has scored not one, but two wins at this year’s National Planning Awards. The plan, which was adopted by an overwhelming majority of Milton Keynes residents at a referendum in May, won both the awards for Neighbourhood Planning and for Community Engagement.

The win in the Community Engagement category reflected the unique way in which the CMK Business Neighbourhood Plan was developed. In its early celebrex with no prescription stages, the plan was put on a Wiki website, meaning members of the public could make their own edits to the draft plan, shaping how they thought it should be created.

The Business Neighbourhood Plan was put together over the course of several years by the CMK Alliance, made up of representatives from CMK Town Council and a range of local bodies and businesses. The winning of two awards is a welcome pay-off for the many years of hard work that went into creating the plan and getting it passed at the referendum.

Are You on the Electoral Register?

Representatives Gather for First Meeting of the CMK Residents’ Forum