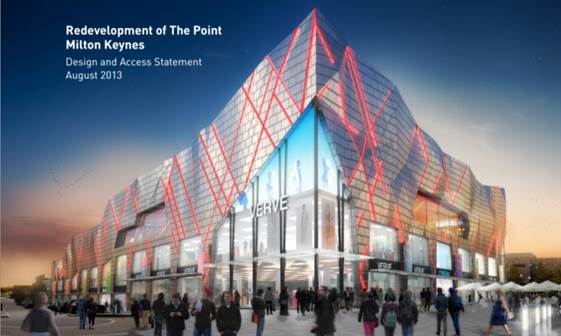 The Point was one of the earliest buildings in CMK and quickly became an icon of everything that was bold and fresh about Milton Keynes.  When its owners, Hammerson, initially proposed demolishing it last year the Town Council hoped it could be saved and refurbished, however this looks increasingly unlikely.

Hammerson have now submitted an outline planning application which will be decided by MK Council (MKC) as early as December. If approved, it will fix the principle of development and general size of the new building but all the details including design will be left to a future date.

The Town Council is disappointed with the outline plans as we think they are not ambitious celebrex online cheap enough for such an important location. We have told MK Council that we believe that any plans for redeveloping The Point should be part of an overarching plan for the whole area between Midsummer Place and The Food Centre.  We have also asked for better pedestrian connections and more interesting public spaces and cultural/community uses to be worked into the scheme for a new ‘Point’.

Finally, we do not think the design indicated for the new building fits well with the special character of CMK and its best architecture. Overall, we do not believe the current plans will create a high quality of development in the landmark tradition of the original Point.