namely, the application was premature in the light of the emerging Business Neighbourhood Plan for CMK, and the draft CMK development framework. The applications prevented the orderly development of other sites in that quarter of the new city, and contradicted the design philosophy of CMK. The applications breached the following policies of the local plan: D1, D2, D2A, CC7a, CC7c, CC8, CC9 CC13, T2, T3, T4, T10, HE2, HE4, and did not meet adopted parking standards.

The Committee also made the following comments:

The committee noted that the public consultation exercise in Middleton Hall, which the applicants reported as having produced a large body of support for the proposal, was flawed in a number of ways:

It rejected and did not record responses that were against their proposal (evidence can be given for this assertion, if required)
The interviewers deliberately targeted those most likely to be in favour of a new primark store, especially young women, and ignored those less likely – the responses are not therefore from a random sample. No effort was made to separate Milton Keynes residents from other respondents.

These flaws mean that it should not be taken seriously as an attempt to consult the public, and its results should be ignored

The route north across Secklow Bridge is a significant route for those leaving Fishermead by car – its removal would mean difficult detours, and prevent future public transport routes between Fishermead and the north of the New City. In addition, more traffic will use the Childs Way entry to the rump of Secklow Gate, making it even more difficult to leave Fishermead via Pentewan Gate (especially as the casino in Xscape begins to attract customers).

Alternative sites
The Committee noted that the criteria for rejecting alternative sites were those set by one client store, and did not take any notice of the wider benefits to Milton Keynes city centre of developing other sites – a point made with some force by English Heritage, whose other comments were also supported by the committee. 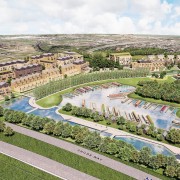