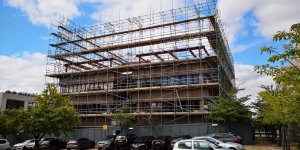 An application to add two extra floors to a former CMK office has been refused by Milton Keynes Council’s development control committee. The building is currently in the process being converted from office to residential use, which can be done without planning permission due to recent government legislation. However, physical changes like the extra floors still require permission.

CMK Town Council had submitted two objections to the application, expressing concerns over the impact the proposals would have on parking in the area and the visual impact of the expanded building.

Despite this separate application for two floors, the building’s owners already had permission for a single extra floor https://medsmagazine.com/generic-cialis-online/ from a previous application, which is now under construction (see photo).

An application has been submitted to add two extra floors to the old Grant Thornton House office building as part of its conversion to residential use.

This follows an earlier application, which was approved, to add one extra floor. This floor is now under construction.

The application will be considered by Milton Keynes Council’s planning committee on Thursday 6 September.