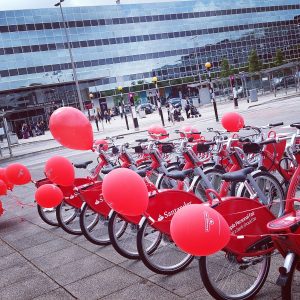 The launch event in Station Square on Friday 18 June.

The project launched on Friday 17 June, and under a week later there are already 3,400 registered users. The 400-bike scheme has had over 2,500 rentals in its first week, generic celebrex canada well in excess of expectations.

Sixty bike docks have been installed in the estates around CMK, with future expansion to other areas of the city expected to follow.

The scheme is the second largest of its kind in the country, beaten only by the original ‘Boris Bike’ scheme in London.